Manuscripts by Ahmed Sudi Bosnevi in Bosnia and Herzegovina

This paper presents the manuscripts of Ahmed Sudi Bosnevi kept in manuscript collections in Bosnia and Herzegovina. In total, twenty manuscripts were presented of which five were transcripts of comments on Gulistan, three on Bustan, five copies of comments on Ibn Hajib’s grammar of Arabic language al-Qafi, and one copy of the second Ibn Hajib’s work, Ash- Shafi, Hafiz’s Divan and Jazeri’s work on tagwid (rules for Qur’an reading). Most of his comments were copied at the beginning of the seventeenth century, mainly in Istanbul. One copy of Gulistan was made in the year of the author’s death and endowed to the Dervish-pasha mosque in Mostar, while two copies of the same work, twenty years later, were endowed by Shaban-efendi “to those who are interested in Persian literature in Foča.” On the basis of a transcript of Bustan preserved in the Gazi Husrev-bey’s Library, which was transcribed from the autograph, the scientific public learned that Sudi’s name was Ahmed, and not Mustafa as it is even today wrongly stated in some catalogs and databases. Comments and works by Ahmed Sudi Bosnevi were also present in private collections. This was confirmed upon an insight into inheritance documents of the Sarajevo sharia court. In Sarajevo only, twenty copies were recorded which means that his works were significantly represented in the territory of Bosnia in the Ottoman period. 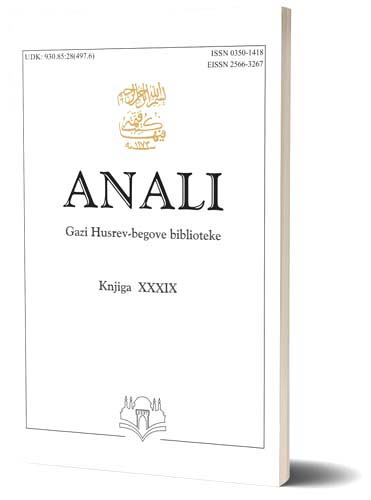